This 28 February 2007 in Taiwan, a commemorative stamp confirms the State's denomination on the stamps after political events initiate by president Chen Shui-bian. Former denomination « Republic of China - 中華民國 » is replaced by « Taiwan - 臺灣 ». 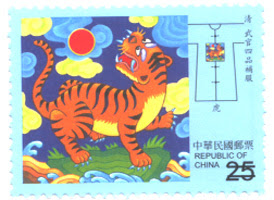 One of the four last stamps out of a serie with the former denomination :
it represents the uniform of a military official of the Qing dynasty. 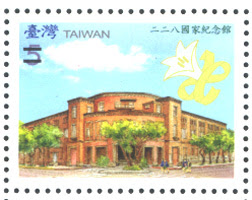 The first time with the new States's denomination.

Since the beginning of the year, President Chen has been asking national companies to modify their name to replace the word China by Taiwan. His Democratic Progressive Party wants the independence of Taiwan against the People's Republic of China (PRC), whereas the Kuomintang, ex-majoritary party, governed with the idea the Republic of China (ROC) lasts in Taiwan since 1949 proclamation of the PRC by Mao. The board of the taiwanese post accepted the change of name and the new brand appeared monday, February 12th. The Chungwha Post (post of China) has become Taiwan Post.
But, for philatelists, the subject of the first stamp issued with this name is strongly linked to this politic issue and the history between exiled government of China and the population already present in the island in 1949. The building on the stamp is becoming the 28 February the National 228 Memorial Museum, thank to the town of Taipei. It commemorates the 228 Incident : the 28 February 1947 began the bloodly repression of indigenes' demonstrations by the ROC army. Tens of thousands civilians died and these events divided longly the local population and the Kuomintang government (interdiction to speak about it, two decades of debate to the presidential excuses in 1995).

The issue of this simple stamp of 5 new taiwanese dollars (letter less then 20 grammes) is at the center of history and today's politic events of Taiwan.

Sources : Taiwan Post (up and right is a link to the version in english).

1st March 2007 : on the Stamp Collecting Round-Up, Don Schilling found an article of the Tapei Times about the competition between Taiwanese buyers in front of post offices for the new denominated stamp. Is there a proof of philatelic interest from them, or a political one ?
Published by Sébastien No comments: Permanent link

Like many others before me, I have decided to write a blog about philately, to show you stamps, covers or news from all over the world.

The idea slowly made its way since the discovery of Dominique's blog : the Blog philatélie.

There is a french version written alongside this one.

Have a nice time here.
Published by Sébastien No comments: Permanent link