I just come back from two days spent in London, with sight-seeing and shopping. My next messages will accordingly be about the British philately as I lived it in London. Including:
* my visit to Stanley Gibbons shop on the Strand,
* but to the little very interesting shop accross the same street;
* and one more to a real philatelic-only bookshop;
* the Stampex show, some impressions,
* and, my thoughts about the very-philatelic and little-postal stand of the Royal Mail;
* how do a "Post Office" look like to day in London;
* what do the British Library propose to philatelists;
* some bought stamps, a very little number compared to
* my bookshelf a little bit crowded after two days.

To the happiness of the reader.
Cheers.
Published by Sébastien No comments:

For the pleasure of a robin :

(and a Machin too :).
Published by Sébastien No comments:

May the 90 years celebrations of World War One ending and - with it - the fall of the Austro-Hungarian Empire, have inspired philatelic press? In any case, it is difficult to believe in mere coincidences: the four British and French magazines are talking about the philatelic and postal history of this part of Europa.

On the Northern shores of the Channel, the sexagenarian British Austrian Philatelic Society is leading the movement. Its honorary secretary wrote for Stamp Magazine of February 2008 a general articles on the Empire and its many philatelic parts, followed by Adrian Keppel's article about the centenary 1908 stamp issue for the 60th birthday of Franz-Joseph coronation. The following month, Gibbons Stamp Monthly opens its pages to the APS members with five articles: ideas for Austrian collections, Vienna's poste restante and pneumatic post, postage due and personalised stamps of Austria. The magazine plans to publish such special features prepared by philatelic associations regularly.

On Southern Channel shores (i.e. France), sculptor and politic specialist of national symbols (including postage stamps) Michel Coste animates the move on the other side of the Empire, in March 2008 issues. In L'Écho de la timbrologie, after a long reflexion on the renewal of postage stamp image thank to the numerization, he presents the main lines of his Panorama des timbres-poste de Hongrie, a timeline presented research of the evolution of Hungarian stamps. It is a sequel of the same work for stamps of France that can be watch at the Musée de La Poste in Paris. In Timbres magazine, the same Coste develops the evolution of Hungarian definitive stamps, from the same Panorama, and with hints for some further studies for definitive stamp evolution in the other Eastern European countries.

Have good reading and long thoughts.
Published by Sébastien No comments:

This part of a cover was sent three days after the coronation and shows the succession on the British throne: the late king on a four national flower stamp. The slogan cancellation told the ritual sentence : "Long live the Queen".
Published by Sébastien No comments:

I don't know the origin of this video (amateur edited, La Poste official film,...) but it summarized the evolution of the definitive stamp design of France since 1849:


22 June 2008 update:
As Dominique wrote on the Blog philatélie, on 22 June 2008, this video was viewable at the Salon du timbre, Paris 2008 stamp show. Very certainly a La Poste's video. A guess: was it part of the pressbook to present the new Marianne of Nicolas, last January 2008, when the design was made public?
Published by Sébastien No comments:

This stamp of Trinidad and Tobago issued in 1958 is one of the last remains of the 4 living years of the West Indies Federation, when the United Kingdom tried to establish the independence of the British Caribbean under one State. 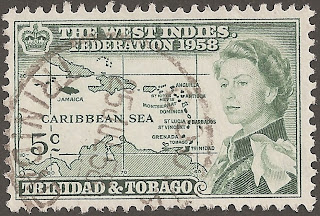 Finally, in 1961, by referendum, Jamaicans voted to quit the Federation. Part of their politician leaders were impatient to become independant. They disagree with the choice of the capital, then a United States military base. Probably, the island's wealth compared to the economy of more little islands may help the choice.

Quickly (officially adopted on January 1962), Trinidad and Tobago did no more support the project of Federation: the archipelago would have to furnish three quarter of its budget. Moreover, the little islands were afraid to become "little Tobagos".

The British parliament recreated in 1962 the last eight original colonies. Seven of them became independant at their own times. Montserrat and three dissociated territories of greater entities are still British overseas territories.
Published by Sébastien No comments:

Reading it, I discovered that, since 1st January 2008, all vehicles weighting more than 3.5 tons can't move above 90 km/h inside the European Union.

And there Royal Mail is obliged to explain that, because of the Union, mail might arrived at your post offices or post boxes a couple minutes later than usual.

But, in town, you will see your mail before 2pm (3pm in the country). I don't know how a British postman's work is organized and if he really finish his route at these times. But, in France, I haven't seen a postman in the streets after noon. Perhaps, mail sorting is differently organized: in France, postmen begin early in their local post offices by sorting the mail of their routes.

If this tiny article gives ideas of compared studies of the work of postmen...
Published by Sébastien No comments:

An interview of French engraver Yves Beaujard by Gauthier Toulemonde is broadcasting on webtv TV Timbres since today.

During the first third, the topic is Beaujard's last artwork who will become the new French definitive stamp. Consequently I watched at the artist's workroom and walls.

The second part was more interesting because it was the telling of his many careers by Beaujard: the first trials for Vietnamese stamps, expatriation to the United States where he learned the art of engraved landscapes and portraits for banknotes and plates (the latter with the portrait of US presidents), his return as illustrator in France (including Alex le chat, a comics published in the French Mickey Mouse magazine), and finally his philatelic career starting at the end of the 1990s.

In the final part, he presented the work of the Art du timbre gravé association, whose he is a vice-president.
Published by Sébastien No comments:

After six years living in northern Paris, I am taking some time to discover who are the people my streets have been talking about for so long. 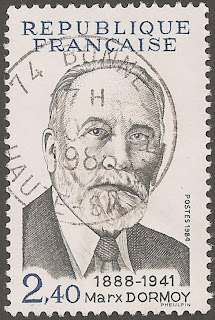 Stamp by Jean Pheulpin.
Marx Dormoy, mayor of Montluçon (center France) and president of the General Council of Allier, was a member of the French Parliament in the 1930s. He was named Minister of the Interior during the Popular Front government. In this position, he fought againt far right movements like La Cagoule, whose members assassinated him in 1941.

Closer to the 18th arrondissement of Paris where a metro station is named after him, he used his power to depose the mayor of Saint-Denis, Jacques Doriot, a communist who became a fascist and collaborationist.

To end this too-short summary, Dormoy was among the 80 Members of Parliament who refused to vote the full powers Marshall Pétain asked for in June 1940. His assassination took place while in surveyed residence in Montélimar.
Published by Sébastien No comments:

Like Eric, whose article I advise you to read, I received a post card from Finland with one of the ski lenticular stamp.

The movie-like animation is spectacular compared to the animated drawings of the French rugby stamp, issued September 2007. I appreciated the face value too: the first class letter, and not 3 huge euros for the French one (5 times and a half the letter rate).

A little problem, the plastic stamp has got a transparency: the postcard's barcode is visible on the white snow the ski champion is racing on.
Published by Sébastien No comments:

Vendôme again: how French stamps are made

After an artistic topical message this afternoon, I looked on Google for informations about the places you can see on the stamp. In an article of regional daily paper La Nouvelle République du Centre, the mayor and the deputy of Vendôme told how they fight to have their city on stamp.

Everything happened before 2006 and the final writing of the philatelic program for 2008. In the French government, the minister or the secretary responsible for the industry surveyed La Poste's activities. The French philatelic program is finally a decree.

The mayor (socialist) and the deputy (new-centrist... don't ask) reminded themselves of their letters to each minister of Posts, the constitution of a strong file to strike against the city whose mayors are higher-rank politician (like Évreux and then mayor Jean-Louis Debré, then President of the National Assembly, and now President of the Constitutional Council).

But, be assure that politic has nothing to do with stamp programming in France. The regional postman in chief told: Vendôme has a quality file and associated the 80 year old philatelic local association to the event. Ouf!
Published by Sébastien No comments:

How he worked better without Nicolas

to watch alongside the blue Dole by Albuisson, issued in 2007.

1: the same who designs the Marianne serie to be issued next July 2008 (design I hate to see).
Published by Sébastien No comments:

The French Parliament in Congress

Today, Monday, February 4th, 2008, the two assemblies of the French Parliament were in Congress to modify the Constitution of the Fifth Republic, conforming to Article 89 of this Constitution. The Constitution now integrates the European Union Treaty of Lisbon.

These Congresses took place at the Versailles Palace. Deputies and Senators can post mail at a special post office, whose cancellation (quite simple datestamp) is researched by collectors. But to please their electors, Members of Parliament accept to post them covers of course.

For some philatelic evocations about the Congress:
* on Philatélie et marcophilie blog about the 2007 Congress;
* there a deputy reminded his fellow citizens that he accept to post covers for them.
Published by Sébastien No comments:

The most easiest design to represent a country : the flag of its State. 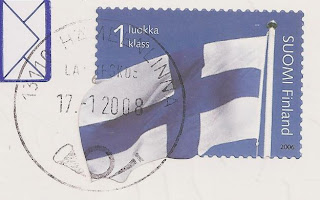 With an interesting use of the adhesive paper cut.
Published by Sébastien No comments: