In the family mail, a grand-aunt and her husband went to their usual camping in Haute-Loire. Their letter was cancelled at Le Chambon-sur-Lignon.

Surprise, one of the near-extinct pictorial cancellation resists with its part-historical, part-touristic message: "The open space / the spirit too". The second sentence reminds of the heroic past of this huguenot village whose inhabitants saved thousand of jew people during World War 2.
Published by Sébastien No comments: Permanent link

Two months without blog, three months between three roofs, it is finally time to come back on olf and pleasant news.

Last May, I was disappointed facing how I can get what I wanted of the Canada-France joint issue for the 400 year anniversary of Québec City.

Either I paid eight euros for the classical French post's joint issue presentation pack (the first was, I think, for the 1997 Euroregion SAR.LOR.LUX stamp)1 but I wouldn't have the margin inscriptions of the Canadian issue, or I ordered the full Canadian sheet of sixteen stamps because Canada Post do no more cut stamps into gummed sheets for ordering customers. But again problems: their full ordering website is far too complex and I don't want to use so much room for my collection (one sheet per issue...).

The miracle came surprisingly from the French new issue specialist, the anonymous society Théodore Champion and its hostesses at the June 2008 Paris Stampshow. 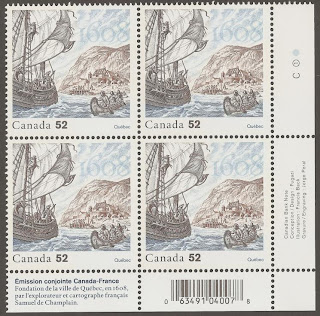 These ladies (who I never saw at the Drouot street shop) had at the collector's disposal the dreaming piece: sheets had not been fully cut into individual stamps. There were corner blocks that Canada Post succeeded to design up to the Israelian tabs. And at a price, superior to the face value, but reasonable compared to my two other options.

Really, this show was better on the merchant's side than of the one of overpopulated counters of the French post. But, I will be kind with Phil@poste: Canada Post is selling gummed stamps by the whole sheet only. Phil@poste do not do it... not yet :)

Notes:
1 : look at the Wikipedian article for more about the SaarLorLux concept.
Published by Sébastien No comments: Permanent link

To own a machin

To have one thousand pounds sterling in advance on my nowadays and future projects, or with a museum budget, be able to buy one of Arnold Machin's artwork that became the definitive series in use since 1967 in the United Kingdom. 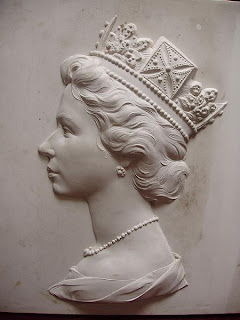 Dominique Stephan wrote about it, and about a sketch declared from 1967, certainly one of the seventy proposals that Douglas Muir dated January 1966 in its A Timeless Classic (some are reproduced pages 125 to 128). Don Schilling completes with an article from The Telegraph: this plaster is one of the only four known of this design... the other three been in the Royal Mail archives.


Breaking News :
A rumor in Stamp Magazine dated October 2008 announced a new Machin for October, but Royal Mail refused to say more. The Postage Labels of the UK blog by Brian Sinnott is showing that the effigy by Arnold Machin is now printing on British machine stamps. In France, we are still on pale blue and yellow...

A former British machine stamps here and there.
Published by Sébastien No comments: Permanent link

Back... not thank to my provider

Sorry for the long silence, but my adsl provider, a former State efficient administration becoming a private competitive shareholder-friendly company, had some quite astonishing difficulties to move my line...

You would understand why I am not a great fan of a large privatization of the French public postage operator, La Poste. I fear that the final client won't be the better serve by this decision.

Stay tune for the return of articles.
Published by Sébastien No comments: Permanent link