Festival of stamp in Montpellier

I did not want to go to the Festival of stamp, the French La Poste's and French philatelist associations' day to promote philately. This year, the Looney Tunes were bought to aim this objective (financial for La Poste, public relations for local associations). Personally, the topic, the many forms of sales don't interest me this year. But, I went invited by Yvon Nouazé, author of the Oblitération mécanique en France. He was there to help the Montpellier Philatelic Association which organized the event.

It is difficult to deviate the flux of people coming from or to the commercial Comédie Plazza to the Polygone commercial center, and direct them to the Meeting Room of the City Hall. But, the 11H30 drink and appetizers and some games helped attract kids and teenagers with their parents. The atmosphere was far from the 2007 Stamp Festival in Paris where the firstdayers were filling the place to buy and buy without hunger while the youth activities on the first floor were quite deserted despite the large spaces on a Saturday morning.

In regions, another play: two dealers of Montpellier and two from Paris, collections exhibited and really appreciated by visitors, actual games to be won. Thank to Mister Nouazé, I discover the collection I had to see: a display of postal registered stationeries from the United Kingdom, Queen Elizabeth II reign, from the Tudor's Rose and the Machin designs.

One cloud: a woman complained of the price a dealer is currently selling sheets from the Siècle au fil du timbre series and she be struck by the dealer's advice to use them on mail. More money to be done like that than reselling them. When do some understand that to collect is a pleasure. If they want to make money, you shall not accumulate everything blindly.
Published by Sébastien No comments: Permanent link

In March 2009 issue of Scott Stamp Monthly, James E. Kloetzel, editor of the Scott catalogue, completed a study begun in September 2005, October 2005 and April 2006 of the same magazine.

What is the series of stamps that needed all this returns and merited the adding of seven new variations in the reference catalogue of the United States? The overrun countries series honoring by their flags thirteen countries conquered and occupied by Nazy Germany, Fascist Italy and Imperialist Japan during World War Two. The stamps were issued by the United States Postal Services between June and December 1943.

The article full of details and a diagram of the rotative press used by the American Banknote Company explained why this series' specialists are eager to cut their hair in fourth when they are facing each one of these stamps.

What I will try to summarize despite my known incompetence in the matter. Sorry if the words are not the correct ones.

To succeed in printing many colors needed for the flags and the ornament in only one passing of the paper sheet, a offset report cylinder received the inks from four plate cylinders. Each cylinder can receive two different inks. The accumulated inks on the report cylinder are printed on the paper thank to a press roll. The possibilities of so many different colors was necessary for some stamp sheets printed with two types of stamps (one in the upper part, one in the lower one).

The ink are very thick and do not mix with each other. That explains the first variation knew on many of the stamps and by many collectors: the black dots that give the wind effect on the flags can be on top of another color (previewed effect) or under another color (non wished effet), depending on the order of arrival of the ink on the report cylinder.

Thank to a recensing in a vast collection of this series, the author wondered if the non appearance of the black colors was not due to other causes than inversed order of printing. That can be a lack of black ink at some point of the printing operations. Is the black under the colors or was it never printed?

Or, for the last cutting of thin hair, in some case, the black ink or another ink had been heavier than anticipated and move up or down another inks. The stamps are not of the first variation, but are difficult to recognize too if you don't know precisely how the printing was done.

Kloetzel admitted that to discern these variations is not possible for the common collector, even with a large collection and a microscop. That only a small group of specialists will be able and willing to do this operation.


To take a break after so much reflexions, let's play a little game inspired by these stamps, on purposegames.com website.
Published by Sébastien No comments: Permanent link

Crossing on the calendar: a postcard from Thailand arrived early in February, just before my journey there, thank to Postcrossing.

The Chinese zodiac stamp on the right is an international mode now. Its nationwide postcard value completed a commercial stamp for "Thailand Best". Here, the rice, everywhere during meals.

However, the Rooster Year stamp would have better suited my diet.
Published by Sébastien No comments: Permanent link

The philately by the most simple expression

Without the collectors of new stamps, all mail would look like this and be sufficient for postal activities. 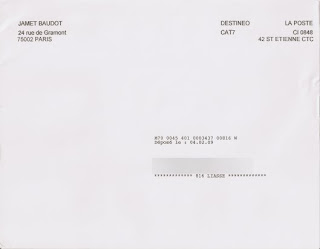 This simple paper sheet with the mentions for Destineo service (for La Poste's big clients) permitted, this February 2009, the sending and arrival of the last auction catalogue of Jamet and Baudot.
Published by Sébastien No comments: Permanent link

Back from tropicals while Machin news are always running

My journey in Thailand will offer you a new season of articles, after the 2008 London one. Please, be patient for the philatelic part, the generalist part will certainly arrive sooner and in full length on the gemini blog of Sebphilately.

In the Machin series news, the Royal Mail reinforced the security printing features. On 17 February, were issued the first postage stamps to fight the reuse of uncancelled used stamps: iridescent ink (already seen on the high value stamps), supermarket price tag's slits, no more water-soluble layer to separate the stamp from the envelope and the adhesive.

Ian Billings, a stamp dealer specialised in British new issues, has been following the case from the first Royal Mail announcement and kept regularly informed the Virtual Stamp Club's readers. I advice you to read his website's pages about these issues (17 février, 31 mars). The latter is about the new stamps needed because of the 2009 change of postal rates.

The main consequences for collectors is the impossibility to remove the stamps from the cover: either they finished torn by the slits or sticky... or both. Billings already discovered that some 2009 Christmas stamps were already without the water-soluble layer.

Many problems for the collectors to correct the incapacity of the postal operator to cancel stamps: sorting machines made for standardized covers, packets franked with stamps uncancelled because the post offices and the postal counter in shop-market-etc are less and less furnished with datestamps, no solution put in the sorting mail centers. Security printing seemed to be easier than to change methods (surely less expensive in human ressources too).

To measure the efficiency of this politic, follow eBay auctions: will there be less auctions proposed with hundreds of British stamps like new but without gum or adhesive?
Published by Sébastien No comments: Permanent link

The redactor of this blog is taking fifteen days of rest. I'll write you soon.
Published by Sébastien No comments: Permanent link