This Majesty's face is definitively made for stamp appearances. 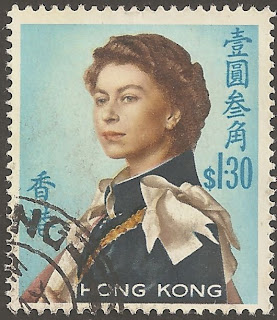 The pictorial advertisment on postage meter will live long :

In France, really no possibility of cultural or touristic pictorial on new style cancellations?
Published by Sébastien No comments: Permanent link

France's pictorial cancellations have been disappearing little by little these 2000s. We knew it for months. Late 2007... 2008 maybe, these flammes will be extincted.

I have two registered letter to send these past two weeks. It is a - expensive and unsure - way to find one of the last flames :

But, before you burn your 5 euros banknotes at the post office to send registered mail, watch that the famous esoteric codes are already here (here the 11868A ; the receipt was signed in Lille) :

Who will find the last use of this kind of pictorial cancellations of France ?

Updates (25 November 2007) :
Yvon Nouazé reminds me that one element on these receipt are objects of questioning on the Blog philatélie : FRIM code on the upper right corner (cinq barres et FRAB) that may indicate to the mail sorting machine how the adress is written.
Published by Sébastien No comments: Permanent link

Like Dominique, I found something free and not useless at the Paris Autumn Stampshow : Saint Pierre and Miquelon 2008 philatelic programmation. (http://www.spmtimbres.com/)
As always, a large part is about local history, geography and fauna/flora.

For the secret of the postal rates, go to La Poste website for the archipelago located near Western Canada. You will see that most of the French Marianne definitives issued there overprinted are not useful on their own.

Mail is distributed only in postal boxes (boîte postale ; "BP" and a number on the adress) located inside the post office of Saint-Pierre. Do not forget this number when you write to the French oversea territory. Postal box BP 4100 is the poste restante.

In those Parisian striking days filled with lots of walk (I hate being crowded in the subway), let's me have some delicaties. Here is a Machin... 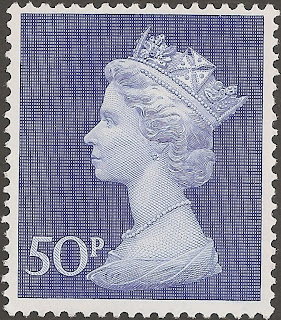 ...printed in intaglio, issue of 1970. Aaaaaaah !
Published by Sébastien No comments: Permanent link

This stamp of Swaziland pleased me immediately : so British while so evocative of Swaziland in my Western mind. 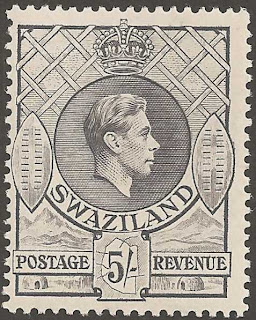 This design appeared in 1933 with the effigy of King George V turned to the left, and used again here with George VI portrait in 1938.

A little bit more on postal history of Swaziland with a recent stamp issue, read this The Virtual Stamp Club post.
Published by Sébastien No comments: Permanent link

New Stamps of the World News

Every philatelic magazine has a section which lists the new stamp issues for the last months.

In Timbres magazine, it is in fact the catalogue of stamp dealer Théodore Champion, whose founder promoted the collection of unused stamps. In L'Écho de la timbrologie and Stamp Magazine, it is a small catalogue trying to follow the news with the more informations as the postal operators wants to give (to credit the artists for their work is not usual). For magazines strongly linked to a stamp catalogue, like Scott Stamp Monthly, it is a form of catalog's update that gives the reader the stamp numbers in advance.

Reading these parts is fastiduous for me, without a goal, a good topical index or an unusually long text under an issue description. See Stamp Magazine, December 2007, page 94 :

After the orthographic fault in its own country's name, the Austrian post entertains us one more time. On 29 May 2007, it issued on purpose a stamp with an error in its design. Commemorating German pilot of Italian Formula One car Michael Schumacher retirement, the 29 May stamp forgot the 1994 World Championship title. This error didn't appear on the samp issued in December 2006. Only that some already printed erroneous stamps succeeded to reach the philatelic market... and the inevitable speculation.

I note that the 29 May stamp is not yet declared by the Austrian post to the WADP Numbering System (WNS) while the Christmas stamps already have been.
Published by Sébastien No comments: Permanent link

Another postage meter of French Polynesia

After a lot of walk because of a 3-day (and counting) strike in Paris public transport (fresh air, cold sun, stinky cars,...), I am dreaming of hot sun, white sand and quiet ocean : back to postage meter on covers sent by the Post and Telecommunications Office of French Polynesia.

This time, the meter was printed by a more standard meter machine. O Pacific franc is the value (1 XPF = 0.00838 € or 1 € = 119.32 XPF). This currency, linked to the French franc, then the euro, was created and has been used in French oversea territories in the Pacific Ocean. Today, New Caledonia, Wallis and Futuna, French Polynesia. The central bank is the Institut d'émission d'outre-mer (approximatively Oversea's Issue Institute).
Published by Sébastien No comments: Permanent link

In April 2007, Adrian presented the Machins of Hong Kong, including the commemorative minisheets issued for great historical and philatelix occasions.

In february 1994, for a philatelic exhibition, the 5 dollars green figuring Queen Elizabeth II's sculpted effigy by Arnold Machin is deconstructed. How many steps are necessary to print this series? 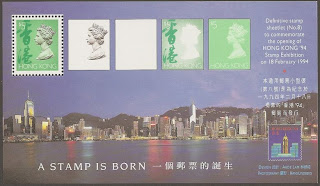 The effigy / I don't know yet / a first colored background with a central white zone and Hong Kong in chinese characters / a second color filling the central zone and the effigy (see the $1.30 on Adrian's blog).


Update :
Adrian sent me technical intels about this minisheet : printed by Leigh-Mardon, an Australian security printer, in lithography (offset in French philately) on a fluorescent coated paper. Thank you.
Published by Sébastien No comments: Permanent link

Daffy Duck on stamps on stamp

Interlude with a third Looney Tunes' character on an United States stamp : 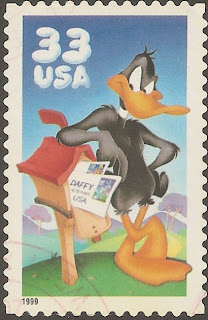 It is a stamps on stamp because Daffy Duck is watching at his incoming mail franked with the two first Lonney Tunes stamps : No cancellation by Toon Post, it seems.
Published by Sébastien No comments: Permanent link

In Sweden, the United Kingdom, France, Canada, Belgium, etc., stamps are sold with non denominated values printed, but that can be always be used for a certain service : generally the first rate of the prioritary letter.

In the United States, these for-one-service value stamps exist and are useful : you don't have to remember the exact postal rate. However, their monetary value don't evolve : it is the value of their issue. After two or three rate changes, the expeditor can be puzzled when the USPS bring back one of his letter, estimated underfranked with a "first class mail" stamp.

That's why the Forever stamp was in May 2007 a postal revolution in the United States : finally, the federal Congress authorized the existence of a stamp whose monetary value will always suffice for the simple letter postage rate.

How can our US citizen know if he can stick alone his old "first class mail" stamp ? The Virtual Stamp Club found a help page by the USPS (pdf file).
Published by Sébastien No comments: Permanent link

Already told by Dominique on Blog philatélie, from Thursday 8 till Sunday 11 November happens the Salon philatélique d'automne, one of the most important French stamp dealer's happening. It is organized by the Chambre française des négociants et experts en philatélie (CNEP, French Chamber of Dealers and Experts in philately).

Like every year, La Poste and its French overseas associates issued some stamps. Concerning France : beautiful engravings by Martin Mörck for a joint issue with Greenland. The artist was there on thursday and friday. A lighthouse minisheet engraved by Pierre-André Cousin is eye-catching too. When Phil@poste wants to produce great intaglio printed stamps, it can!

Concerning this new issued, like some British collectors wrote, postal operators will continue to issue lots of stamps if people buy them. And La Poste desks were the most crowded of the show. because 90% of my bought stamps will finish on mail, I enjoy the large choice tht will be proposed to my correspondents, but can I have international rate stamps for a change?

Mörck was - artisticly speaking -on the counter of the Art du timbre gravé association too. This association promotes the engraved stamps and offers its members artwork from an engravor. This year is a ice landscape, one of Mörck's favorite personal topic.

Speaking of ice, two blocks of Artic ice were exposed at the Greenland Post stand and are melting very slowly. Maybe, the last drinks of happy dealers will be Arctic cold this year.

Like every year, it's what I found by surprise. No official collection. This year, I fall into British and Commonwealth stamps, soon to be shown here for the winter. It is one of forgotten thing connected to that that made me return a second time : I wanted a strange trip to Tristan Da Cunha philately... ne demandez pas pourquoi.

Finnally, at the Autumn Show, you finish by seeing collector's expositions put on the external wall, behind pillars for some. Today, philatelist Jacques Bidet was there to present an exposition rich on stamp projects by Henry Cheffer whose Marianne is commemorated by a French booklet.

And, in France, Paris is not alone to be philatelicly alive, don't forget to read the calendar of the French Federation of philatelic associations (FFAP).
Published by Sébastien No comments: Permanent link

a blog in French to read

I propose you to read this blog in French, including its Fiscal and social-postal stamp part : Presentation of some stamps and letters (one of the thematic entrance).
Published by Sébastien No comments: Permanent link

Here is the post paid meter printed on mail containing philatelic announcements sent by the French Polynesia's Office of Posts and Telecommunications.

(yes, I am short today, but I am so hooked uo to the Queen's stamps...)
Published by Sébastien No comments: Permanent link

A beautiful book, complete, well-written, and that quotes all its sources page by page, that's what this authorized history of the Royal Philatelic Collection is. 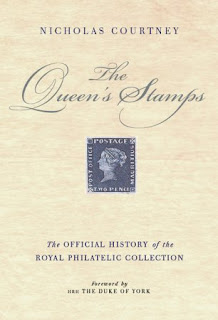 (picture taken from the website of the publisher Methuen)
Believing the biographic note, Nicholas Courtney is not a philatelist. It's just a writer, passionate by history and the Royal family. He had access to the Philatelic Collection, and received the help of every philatelic curators and libraries you can find in London : Royal Archives, Keeper of the Collection, Royal Philatelic Society London, British Library.

The book follows the main actors who has been constituting this collection, since Alfred, the Duke of Edinburgh until Queen Elizabeth II (to only names Royals), illustrated by items of the Collection.

This wealth of referenced informations is a dream for an historian philatelist, but moreover, for a young French philatelist, the book is not hidden in a corner of a stamp dealer or send with a big price tag during a sale after the emptying of a collection. Published in 2004, he is available right now at amazon.com for 39,95 dollars (27,51 €), and used at amazon.co.uk.

I hope for great French philatelists, specialised but readable by all public writer, to see their books be published and made available like that in France. I will certainly have to wait Godot... or Mister Brun (who will certainly receive my visit soon for his second edition of Faux et truqués about stamp falsification, that he has the kindness to print again).
Published by Sébastien No comments: Permanent link

Béziers, where did your beauty go?

This picture reminds me the pictorial cancellations that longly marked mail posted in Béziers, in Southern sunny France : the old bridge, the cathedral, etc.

Last Summer, passing through Béziers, I sent myself a letter :

For those who seek the significance of new French cancellation codes, Claude Jamet and others continue the listing (be careful : pdf file).
Published by Sébastien No comments: Permanent link