Less activities here this week, and less pictures for some times. My computer is striking without evident cause, but the lack of staruping... The old rusty back up plan was reintegrated to full power, understand full power of his 6 years... an eternity in computering.

But, you have many blogs to read:
How many ways do you have to sort Machin stamps? It is the game on the MachinMania. I found twenty-one ways, even twenty-two if... Answers previewed for next week.

Eric du Jura found why the La Poste and the French members of Parliament had been postponing all the way they could the competition on all mail: 52 eurocents to send a simple letter worldwide from Germany!!! You post it at a private operator contracted to TNT. The postal rate war will be ugly... if it wants to arrive in France and other countries.

Pierre Jullien begins the photographic report of the gala dinner of the prestigious first exhibition (and prestige sale) of the Club philatélique de l'Élysée.
Published by Sébastien No comments: Permanent link

A postage meter saw on a mail from Timbropresse, Timbres magazine's publisher:

In black, Toshiba machine's points can be recognized. The letter was sent on 28 April 2009 and redated on the morrow.

Mail franked with meter must be deposed at a post office the same day. Either the sender put this mail on the 29 April, and the Toshiba date is a correction from La Poste. Or La Poste mail system failed to deliver it on day+1 and confirm the treatment on the 29 April by this second date?

I think the first hypothesis is the correct one. I believed I saw such an example on one of the blogs I regularly read, but, of course in this sort of occasion, I could not put my eyes on it again.
Published by Sébastien No comments: Permanent link

Postage meter printed on a cover sent by a French political party:

« La Lettre prioritaire », the French priority service at 0.54 euro, instead of 0.56: error in programming the meter machine? Improved rate for a big sending customer?
Published by Sébastien No comments: Permanent link

Who is this Victor Segalen?

Who is this Victor Segalen that I discovered on a mail sent by a French association, still using its old stamp storage? 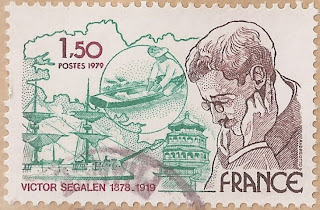 By the design and engraving of Claude Andréotto, a traveller from Britanny, explorer of Asian and Pacific spaces.

Reading the article on the Wikipedia in English helps precise things: China and French Polynesia hosted this naval doctor and writer.
Published by Sébastien No comments: Permanent link

The Muse is still walking

Replacing the cactus, the new philatelic Muse of Monaco continues to walk the stage in Stamp Magazine (June 2009, page 36) to tick the collectors' curiosity.

This time, with a identical aspect, the scandalous loss of clothe became the beautiful dispersal of a flagrance.

The one of the 2009 Tour de France's Grand Start, which will be the topic of a 0.56 euro stamp red and white with a red cyclist.
Published by Sébastien No comments: Permanent link

Trick at Ludgate Circus: hop not here, hop it there

The attentive readers of Timbres magazine #100 (April 2009, pages 90-92) and of this blog (here is the memory fountain) know that Royal Mail finally launched an automatic stamp and label delivery system, despite the epic defiance of its employees. Since 8 October 2008, at Bristol, and little by little in some cities, Nixdorf's ProPostal 2000 machines have been delivering Post and Go labels for weighted items and Faststamps figuring the eternal Machin effigy.


Brian Sinnott continues to follow the machines' advance and the collection of this stamps. Follow carefully, you, futur philatelic tourists to London!

At the Ludgate Circus post office (code 024003 on stamp), 16-18 New Bridge Street, in London center, facing Blackfriars station, the machine ceased its function. It sold labels and stamps from 15 October 2008 au 22 April 2009. Cause : the office closed despite petitions from people and firms of this business district. The City of London provided a list of three surviving offices.

To partially replace this office, turn at the corner into Tudor Street. A anonym door will open you a space of complete autonomy, no postal clerck in sight, but four machines in function as soon as 20 April with the 242007 code.


Obviously, collectors quickly understood the value of Ludgate Circus machine stamps: a little bit more than six months of existence for its code... £$€...

But, be careful, the inaugural case of Bristol created perfide desire. Having bought stamps in Bristol and having at disposal a datestamp, some malignant people are trying to sell first day covers bearing machine stamp older then the 8 October and a cancellation distant from Bristol.


Merry is the subject
of Elisabeth
for not he knows
French pallor.
Published by Sébastien No comments: Permanent link

TV Timbres is a little asleep, but is certainly for the three last years, one (the only?) of the serious tentatives to produce audio-visual philately.

In the United States, the American Philatelic Society's President is taking initiative: post a philatelic video on youTube before 30 June 2009, inform Omar Rodriguez, and you may be the winner of the President Challenge awarded with two hundreds and fifty dollar of APS products and services.

Among a how-to-do-a-video guide, Mister Rodriguez points to his try on the history of Mexico and its provisional issues. If you prefer celebrities' letters, watch Tom Richards'.

All the participating videos are listed here.


8 May 2009 :
And when you find one, others are attracted. Andrew Reeves-Hall, a Canadian living in the United Kingdom, filmed the last day of work at the Delivery Office of Whitchurch, on 2 May 2009: arrival and sorting of mail by sectors, then receivers ; the counter. Closures of offices and the reorganisation of the postal system has been under motion and debates for many years now in the United Kingdom.
Published by Sébastien No comments: Permanent link

Uchrony or alternate history is a literary genre inside science-fiction, whose goal is to imagine a rewritten history. Action takes place in a modified line of events compared to the history we live in. The famous "What if..." The French word seems to be created by Charles Renouvier in the 19th century for his book Uchronie, l'utopie dans l'histoire (not yet numericly available on the web).

Among other topics, the world as it might have been if World War Two turned otherwise. And not simply the victory of Hitler's Germany, a easy topic when faced with the massive documentation produced by the thousand year Reich-to-be and Speer's projects under the dictator's guidance. But, the internal divisions inside the two alliances are largely showed and used by authors, like in The Man in the High Castle by Philip K. Dick. He told how Nazi Germany and Japan would diverge their ways during the occupation of Northern America... in a fake brotherhood.

On the science-fiction market that has been producing a lot for so long (understand in France: before "adult" and "serious" publishers saw the cultural and financial interest), the cover is a weapon to catch the reader vulnerable in the middle of new book towers and juxtaposed titles on entire walls.

To shock to catch an eye. The postage stamp can help. 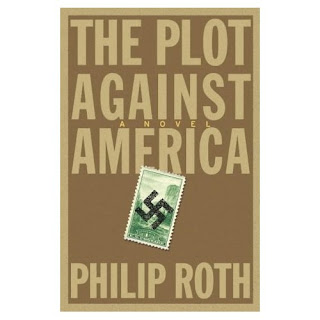 (amazon.co.uk)
In 2004, the one cent green of the 1934 National Parcs series was used cancel with a Nazi swastika on Philip Roth's novel cover, The Plot Against America. The story used the anecdot that a Republican senator had proposed to aviator Charles Lindbergh to enter the race to the 1940 presidential election, when the United States were in their isolationist period.

The actual stamp earn alone a specialised collection: useful denomination, philatelic minisheet at the 1934 Trans-Mississippi exhibition, and, with this cover, a imaginary fancy cancel. 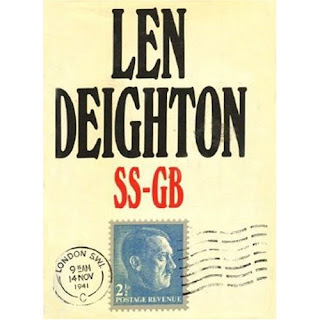 In 1978, the first publisher of SS-GB by Len Deighton went right to the thing: Hitler profile on a British-like stamp ("POSTAGE REVENUE", value in pence, cancel in London).

The United Kingdom lost the Battle of England in 1940-1941. Late 1941, a detective loyal to Scotland Yard, but obviously doubting of the new power, found secrets from a simple criminal investigation. A storyline that will infant Robert Harris' Fatherland in 1992 and whose first cover was shocking too, but not in a philatelic manner.

Note : new label with this article. "Cinderella" as in the collection of fictive stamps and other stamp-like labels.
Published by Sébastien No comments: Permanent link

This 2008 stamp should be the model for all postal operators and philatelic agents. 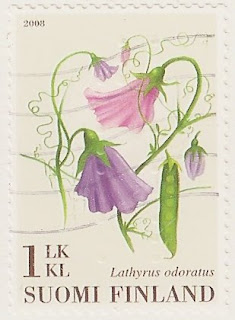 If you watch carefully this scan (or check the WNS reference), you can see the Braille dots that I imagine recall the stamp denomination...
... yes, without any reference to Louis Braille, or a blind-care association. Like that.

When does the generalisation begin? At least in countries where sending a cécogramme is not free of charge.
Published by Sébastien No comments: Permanent link