A touch of Braille

It is not because Gibbons Stamp Monthly's editor in chief did not appreciated the boisterous euro coin sale near his stand at MonacoPhil that he kept long grief against Monaco Stamp Issuing Office (OETP).

(OETP).
As soon as the March issue, here is a 2009 stamp of Monaco on the cover to announce Peter Jenning's topical article on the philatelic 200th anniversary of Louis Braille.

The OETP even bought a page of advertisment to announce his stand number at the Festival of Stamps, the international exhibition of London, from 8 to 16 May. And a good page: #6, after the content and before the news section.

And here you can see how the OETP Director changed: no more denuding muse to tease lascive mal... 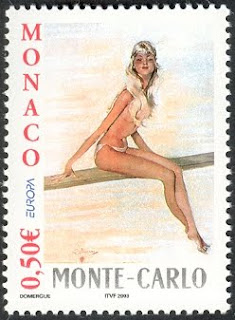 My apologies: now the lady is almost completely undressed. But the goal is obviously artistic: it is on a stamp reproducing one of the great Monte-Carlo posters.

On the ad, that stamp is surrounded by eleven fake red British phone boxe stamps.

Everything put inside a square.

One message: number of the stamp, no name of the exhibition, and the OETP name and e-mail contacts.

The last campaign from the previous director or an attenuated version of the campaign by his successor?
Published by Sébastien No comments: Permanent link