Let's rugby in the forest

Thank to Les Timbrés du rugby website and their catalogue, I found this japanese prefecture stamp timbre japonais about rugby. 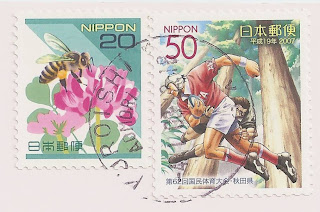 Prefecture stamps are issued in post offices of one specific prefecture. They can be distinguished from the national stamps by looking at the traditional writing of the country name (upper right on the sport stamp, lower left on the definitive).

This stamp's design reminds me of mangas and animes, an impression confirmed by the forest. The latter can be saw as incongruous in South-Western France (perhaps a farm...), but japanimation amateur know that the environmental topic can be hidden inside a more technological and human topic. Watch some Miyazaki's movies for examples.
Published by Sébastien No comments: Permanent link

How ressembling to Nicolas she is!

My feeling was politely indescribable on the first sight, it's worse at second thought when I saw her again in the newspapers. Nicolas' Marianne is what I summarize of this presidency: France is looking to somewhat, better be the void, dressed in a harsh monk dress (lowering of the majority's income/consumption possibilities?). While she passed away, stars - presumed European - have to walk in order, straight forward like a navy fleet, no variety, no differences (an omen to the European Union little states, starting July 2008 with the 6-month French presidency of the Union?).

France seen by his prince-president, a design chosen alone while the public was consulted since 17 years and its choice respected for a decade. As his Marianne, this picture can be interpreted from his politic and opinions (note: I don't ever want to know what the other candidate would have chosen).

After reading the free metropolitan daily, an idea came to me how to philatelicly express my opposition to this Marianne. Like the commemorative stamps I dislike: don't buy them. Better, continue to use as long as possible the joyful hopeful Marianne des Français series, after July 2008.

Today, I began the 6-month investment for a 5-year use of stamp sheets, starting with low values.
Published by Sébastien No comments: Permanent link

Nicolas' Marianne was just presented to the press by La Poste. The design was chosen by the President of the Republic alone.

On L'Écho de la timbrologie website, she is described as "classical"... yeah, sure, compared to the three previous Marianne who were the choice either of President Mitterrand (even if the eyes...), or the choice of a larger and larger public confirmed by President Chirac (and I don't have any confidence in those two persons), Nicolas' Marianne is beautifully classical. The artist is not responsible in the choice of a capricious president who wants his Marianne right now, without consulting the public. At least, now I know which French leader I will never give the task of illustrating my marriage's invitations.

We want to thank Thierry Lamouche for a simple and efficient Marianne (with a capriciously short life), and Ève Luquet too for a precedent lifeful and republican beyond the phrygian hat. But I am deeply and sincerely sorry for the former that a capricious autocratic president was walking by there. A shame imho.
Published by Sébastien No comments: Permanent link

On 10 July 1984, the Greek post reminded the ten years of the Turkish invasion of Cyprus island, after a coup d'État by Greek-Cypriot rattachists. The latter wanted the Enosis, the union of Cyprus and Greece. Their coup lasted only a few days, but the Turkish intervenion divided the island in two, still today. 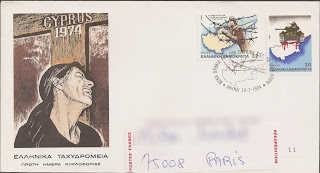 The stamps developped two bellicous and liberticid elements on the Northern part of Cyprus, where the Turkisharmy invaded: barbed wire blocking people and tank moving over blood.

Today, the Republic of Cyprus is the only one internationally recognize and member of the European Union and other international institutions. In the North, The Turkish Republic of Northern Cyprus, established 1983, is recognized by Turkey only. The two entities tried to reunite, but their respective governments and protectors ended discussions in bizarre situation. In April 2004, by referendum, the UNO reunification plan was accepted by the Turkish Cypriots whose governments was the most difficult to convince, but not by the Greek Cypriots who were guaranteed the integration into the European Union on 1st May 2004...
Published by Sébastien No comments: Permanent link

How can you find philately in living sound and animated images, in the news or in its historic interest, without being the annual postal rate increase and a pro-governmental biased journalist nostalgicly remembering the 20 centime stamp of 1849?

Timbres magazine launched with its February 2008 issue the sale of a new DVD about the philatelic TV show Télé-philatélie and its presenter Jacqueline Caurat. It is in the same path as TV Timbres and a first DVD by editor-in-chief Gauthier Toulemonde.

In the United States, since 1998, Lloyd de Vries has been telling a short weekly article for CBS and its affiliated radio channels. He comments the philatelic program, the collectors' and postmen's habits, etc. Transcriptions are readable on The Virtual Stamp Club.
Published by Sébastien No comments: Permanent link

Today, I will be kind with the French post and its -nowadays - inexistent pictorial cancellations. Let's fight the Yankees! :)

Two weeks ago, I have the luck to receive a postcard from Pittsburgh, Pennsylvania, with a readable inkjet pictorial cancellations... (on the five-six Guam stamps I received, at least two can be considered for the inkjet cancellation martydom)

"Happy Hollidays" pictorial instead of waves.
Published by Sébastien No comments: Permanent link

Here is a told in French : in four parts, between Novembre 2007 and January 2008, Nelly explained what he did and why at the last Autumn Stamp Show of Paris.
Published by Sébastien No comments: Permanent link

Amateurly, I would say Tunisian Post may have the same machines as the French Post... when in the hell are we gonna see such pictorials in France? (yes, I know, I'm repeating myself)
Published by Sébastien No comments: Permanent link

Kings of the Belgians

On the cover of Patrick Roegiers' The Spectacular History of the Kings of the Belgians, postage stamps were used : definitives and - at least - one commemorative (the second one picturing Leopold II). 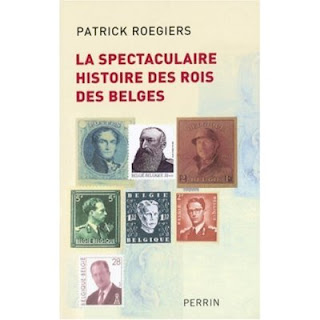 * Christian Boyer proposed, with scans of 19th century specialized papers, the origin of the word "philately" and the writings of the first philatelic authors, either in French or in English tongue. The website is looking for a translator to expand its part in English.

* Helen Morgan, wife of a Mauritian man, studied the history of the first stamps of Mauritius, late discovered by European collectors, so late that they thought the legend "Post Office" was their designer Barnard's mistake. 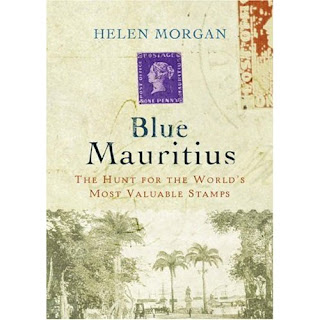 Blue Mauritius cover (amazon.co.uk)
Like the subtitle explains, she hunted these stamps through the 19th and 20th century references : quotations in philatelic papers, miraculous findings and disappearings, rumors of falsification, record bidings, etc. She painted, little by little, the pantheon of classic philately.

Adding to the sources and references (readable in text and at the end of the book), the author let her working sheets on a website, my third reading advice.

Have nice evenings near the fire.

To read again :
I discovered Helen Morgan's book at the same time as Nicholas Courtney's history of the Royal Philatelic Collection, I wrote about here.
Published by Sébastien No comments: Permanent link

Art of the engraved stamp: a blog

Since last December, the French association Art du timbre gravé (which promotes the issue of engraved/intaglio stamps by postal administrations) opens a blog to prepare the "états généraux de la philatélie". The latest is some sort of big forum, show and meeting in April 2008 to save French philately... or is it to protect French collectors from La Poste profits... or for some to shake hands with our president...

Whatever, I hope that the association's blog will go out of this first goal and speak about their goal: art of engraving, engraved stamps, etc.
Published by Sébastien No comments: Permanent link

Previously, the pictorial cancellations of Canada I showed you were incitation to donate to the Red Cross, respect Sunday (either to rest or to pray). As soon as the 1950s, eating was an important step in the well-living that need to be recalled on mail:

The five portraits were inspired by Dorothy Wilding's pictures. She was a regular portraitist to the Royal Court. Her photographs appeared on many definitive and commemorative stamps in the United Kingdom and the Commonwealth.
Published by Sébastien No comments: Permanent link

In December 2007 issue (obviously published mid-November 2007), Gibbons Stamp Monthly let three pages to Noel Davenhill to present the very low values of the Commonwealth since 1937. He did so in an historical and geographical manner. The title is the proverbial expression "A Farthing for Your Thoughts!"

The next month, in Stamp Magazine, David Wright wrote three pages on the fractional values of the United Kingdom, following a historical and numeral path: 1/2 d, 1 1/2 d, etc. The fourth page illustrated the Commonwealth's fractionals with others stamps than the competitor's article.

Have a good moment with these.

Note: in Paris, you find the two magazines around the 18-20th of each month at the WHSmith bookshop, Rivoli street, near the place de la Concorde.
Published by Sébastien No comments: Permanent link

Unusual for a Frenchman used to laïcité, this pictorial cancellation want people to observe Sunday. Is it a religious or a social message? Go to church or do not be forced to work on Sunday?

Rimouski, where the cover was cancelled in 1950, can be found on the southern side of the Saint-Laurent estuary.
Published by Sébastien No comments: Permanent link

To look at other things than pictorial cancellations of France (an extinct race by now), let's see at a Canadian flamme :

made on the 3 March 1949 in Quebec city on a George VI stamp, it called to help the Canadian Red Cross. The adresses on the cover told us it was sent to an art school in Paris (whose covers seemed to fall into the stamp dealer's stock at the Carré Marigny, near the Champs-Élysées).
Published by Sébastien No comments: Permanent link

This cover was sent to a friend of mine by an association of veterans. It was franked with a precancel stamp, one of the orchid series. It is only the second one I achieve to get through relatives.

Orchids are à la mode in philately : outside precancels of France, Taiwan Post and Canada Post issued definitives series and commemoratives stamps about these flowers.
Published by Sébastien No comments: Permanent link

Sent by a Postcrossing user, this philatelic postcard of 1987 reproduced, believing the sender, the most beautiful stamps of Finland and Åland designated by the public. 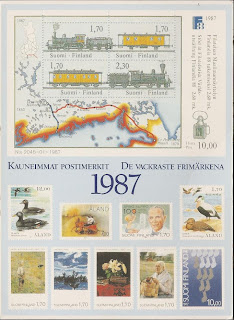 French games : which cancellation will you got?

Post a letter in France and imagine which cancellation you can obtain. Play lottery :) 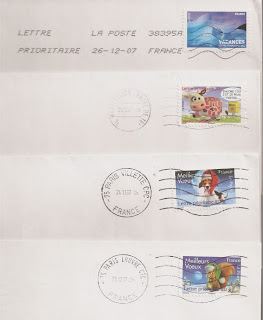 From top to bottom:
* posted in the annex office of Maurin (commune of Lattes) and Toshiba coded cancellation #38395A (rappel) [19 January 2008: Claude Jamet wrote me that this code is for the Preparation and Distribution of the Mail Plateform (PPDC in French) of Saint-Jean-de-Védas, city that is very near of Maurin village. Geographically, these places and Montpellier are in a little area.];
* posted two days earlier at the prefecture post office, in Montpellier city center and non coded cancellation from the mail center [Montpellier mail center (the late 20th century historic one I would say) is in the South of this town territory] ;
* in Paris, cancellations remain very constant throughout the last years (NEC if I don't fail) whatever the mail center.

With these four examples, you have examples of stamps extract from three of the adhesive booklets issued in France in 2007.
Published by Sébastien No comments: Permanent link