French association astonished by 'Origin of the World' stamp buzz

No such things as bad publicity or only the Finnish can do it.

The Philatelic and Cartophile Society of Besançon (SPCB) wanted to mark the opening of a summer exhibition at the Courbet Museum in Ornans by ordering to La Poste a personalised stamp reproducing The Origin of the World by Gustave Courbet. The provocative 1866 painting will be lent to Ornans by the Musée d'Orsay.

The Montimbramoi service refused (with little surprise I thought then) to print something that may shock children. During a meeting in the winter, the Society's members discussed the matter and a solution.

And here the craziness began...

You understand now that the SPCB is active to promote philately and its actions: a local newspaper reported late January this meeting... and then, the buzz began up to conservative newspaper Le Figaro on January 31th. February 10th, on the SPCB website, the webmaster tried to explain the role in the media of what was a small affair after all. This article is largely published in the June issue of Timbres magazine.

This article in Timbres and a May 21st article on the blog present the final personalised stamp: a picture of a bronze statue by Pierre Duc, Gustave Courbet painting 'The Origin of the World' - with the problem slighty reduced in size - with a background made of another Courbet's artwork.

Buzzed but provocative, the Society is surfing on its celebrity: proposing two souvenir postcards with the two proposal artworks, an optional cinderella cancellation of 'The Origin', La Poste will only propose an ordered Courbet effigy datestamp. Finally, the SPCB president hopes that some of the journalists he was forced to meet may come back for other philatelic happenings in Franche-Comté.

The bar code is this multifunctional tool created alongside computering and automation during the second half of the twentieth century: sort the mail by address, quickly find the price of a miniature sheet , etc.

But in France, this has created graphical disasters. Little ones: barcode printed inside a blank rectangular in a minisheet corner, but the French philatelic service's President advocated last year they are too thin for the postal counter optic readers. Great ones: put in a blank rectangular ornated with something connected to the stamp topic, thus destroying the topic... Mrs President told that the Belgian Post hadn't find a solution either.


Because the solution was accross the Channel of course, like how to avoid a double strike on a philatelic cancelled item:

It began with Buckingham Palace interiors minisheet, issued April 15th, and continued with the Greater Post Office Film Unit of May 13th (some movies can be ordered on dvd to The British Postal Museum & Archives).

Instead to force the bar code into the sheet, the philatelic service adds it on the edge, as a white band that can be easily remove thank to a light serration.


Billings and his readers saw too that this margin can only be find on minisheets purchased at the Post Office, and not on those ordered to Royal Mail Tallents House shop. It is explained that the margin is systematically cut off at deliver by Royal Mail employeed "because it is not intended to be part of the collectable product".

A very good idea... but are there not two types of the same minisheet now? What if a new debate without end begin: "Should I collect one with and one without margin?" "Can I buy two at Post Office and cut one myself or is it legit only if a Royal Mail cut off?" and worse if Stanley Gibbons begins to quote the difference.

We will know if this British innovation find the French philatelic pond in June at the next French Associations' Congress and the next interview of the new philatelic service president.
Published by Sébastien No comments:

French moustache fails at Eurovision - Wasn't a Finish one!

Last night, in Copenhagen, Denmark, the French band Twin Twin failed to reach three points and let go the last position of the 2014 Eurovision Song Contest, while Austrian show/wo/man Conchita Wurst catched the enthousiasm of the juries and publics of the whole Europe (but Belarus, Romania, Poland and San Marino).

It's sad for the Frogs because it was a year TV channel France 3 decided to go back to a public voting, mitigated by a jury ; a year when the French song would be moving all over the place.


Was it the song in French? Was it because some large parts of the continent are not ready to acknowledgeskin color is not important?

Perhaps the French broadcaster should have taken the Finnish line about moustache: On April 13th, Itella Posti, the Finnish postal operator, announced a commemorative issue for Tom of Finland, a Finnish illustrator specialised in muscular SM males. That explains the stamps: the master dressed as a military, the naked slave and a pair of buttocks.

Official excuse: the inaugural exhibition of the new postal museum in Tampere will be the correspondence of Tom of Finland, starting September 6th, 2014.

Unofficially? Check Google News with / tom of finland stamps / : every news agency in the world know these stamps are going to be issued in four months, time enough to prepare a trip to Tampere, and thus a lot of people will enter a postal museum!!!

Had France 3 and its public chosen a Tom of Finlandesque band...

'Arabesques', a music festival in Montpellier

The seventh edition of Arabesques in May 2012 was promoted by a booklet illustrated with pictures of musicians, singers and postage stamps.

This music festival is officially named "Meetings of the Arts of the Arabic World" (Rencontres des arts du monde arabe). It is organised by the association Uni'Sons in the park owned by the Departmental Council of Hérault at the Château d'O, a folie in Montpellier.

Inside, the six first double pages about the major night concerts are illustrated with an abundance of pictures and stamps.

Visas from passports, stamps both postal and fiscal cancelled with red or violet inks, on background made of maps of Southern Asia or Spain.

Watch the upper visa from the Iraq Embassy in London. Down and left is a postage stamp from Pakistan marked by a custom stamp explaining this state's rules of entry in English and a rectangular mark of a police station in Barcelona. On the right hand page two cancelled postage stamps from Pakistan:  a fifty paisa and a four anna service stamp.


For the 26 of May concert, not illustrated here, the organisers chose the first day cancellation of Tlemcen used for the Fiftieth Anniversary of Emigration Day stamp of Algeria. It illustrated an evening of cabaret music by artists who immigrated in France.

Other happenings are presented more classically like the exhibition and educated discussion about Emir Abdelkader, both a resistant to French invasion and respected by French military at the time. The black and white reproduction of one of the stamps issued in his honor in Algeria (with the color, it could be either the return of his remains in 1965 or the anniversary of his birth in 1968).

If you miss stamps on your snail mail, don't forget places where the little sticky pieces of paper recalls origins, travels, histories and cultures...

Hitler and his philatelic royalties

In an article in Die Zeit, on September 26th, 2013, German historian Volker Ullrich recalled how Adolf Hitler was "the greatest actor in Europe", as the title of the French magazine Books' translation said in February 2014.


At the moment the first volume of his biography of Hitler was published (Die Jahre des Aufstieg 1889-1939), Ullrich explained seven aspects of the Führer's double personality.

Philately is concerned by the seven and last topic, "The multimillionair ascetic", and I hope some researcher found or will find testimonies and archives still available despite the voluntary destructions in the last weeks of the Third Reich.

Sobriety and frugality was the public image, lure of money and a taste for luxury was the reality. With the last new Mercedes cars being offered at once by the builder, voluntary contributions from the biggest German industries given on a private account and the author's rights on Mein Kampf, a 1930s bestseller, Hitler could easily and loudly renounce his chancellor's income in January 1933, to get it back quietly the year after.

In 1937, because postage stamps bore his face, he could be paid "many dozen of millions [of Marks]" as royalties! Ullrich precised that the check was brought each year to Hitler himself by the Minister of Posts Wilhelm Ohnesorge - whose name is ironic too: no worries...

Nearly nine year anniversary of Postcrossing will be marked by a stamp by Guernsey Post, on May 28th, 2014. 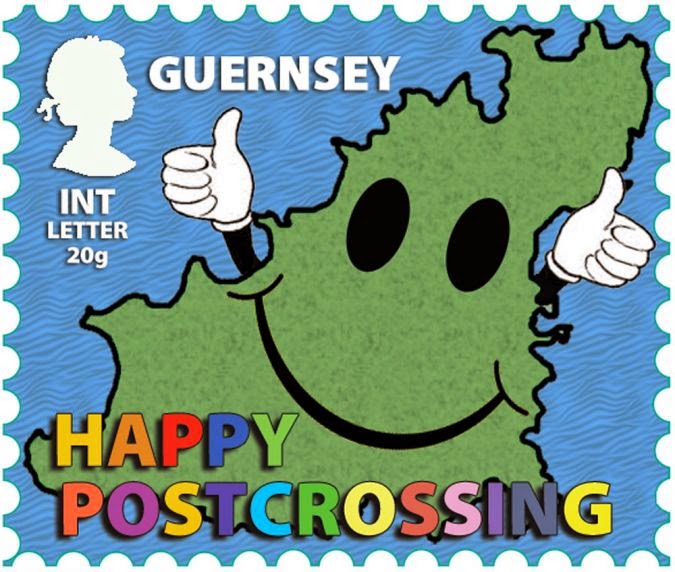 Created with fun by Bridget Yabsley, it will help the Guernsey Postcrossers to send international postcard from the Channel Island.

Remember: the Postcrossing website helps you find one-postcard penpals: you send them a postcard and consequently you become the next on the list of another fellow Postcrosser.

Forums on the website will help you find long term penpals, round-robin exchanges with people in countries you seldom see the stamps.

How can a amateur correspondence website, a little less than 500'000 users in more than 200 countries and autonomous territories, can have its commemorative postage stamps, and not a personalised one?

Thank to lobbying by users, four postal operators have issued stamps:
- PostNL in the Netherlands for two stamps (one for Europe, one Worldwide mail) in 2011,
- Itella Posti Oy in Finland for four stamps in September 2013,
- Belpochta in Belarus for one stamp [a dictatorship encouraging freedom of correspondence!] in January 2014 ("N" value is for international postcard),
- and now Guernsey Post in May.
Published by Sébastien No comments: