Tonight, in Norway, the final of the 55th Eurovision Song Contest will take place.

After Finland and its 2007 victory, not very appreciated by French television animators, Norway issued this 18 May a four stamp series about its winners,including the last one: Alexander Rybak. 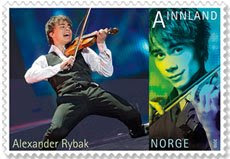 What is the more laughable in the winner song video is the final comment by French presenter: "he may perhaps finish ahead of Patricia Kass" (the French singering proposed a requiem last year...).
Published by Sébastien No comments:

Results of the 2010 London Philatelic Games

I am back from a London week end and a profesional run away to Southern Italy.

Quickly after the doors closed, Saturday 15 May 2010, the palmares of the competitive exhibition of 2010 London stamp show were published. The Grand Prix was incarnated by a reproduction of Arnold Machin's depiction of the Queen's head, offered by the
Royal Philatelic Society London. 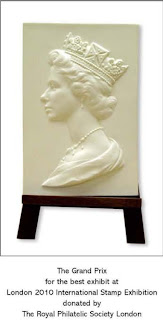 This Grand Prix was won by a British indigeneous with a study of the first line engraved stamps. More original would have been the choice of 19th century Korea or San Francisco as a postal hub in the same period.

French speaking philatelists would be please to know that Miss Livie-Laure Tillard (expert's daughter) won the youth prize with her presentation of the Marianne du Bicentenaire overprinted for use in Saint Pierre et Miquelon.

Soon: tales of a stay in London, a little line of the Italian one and too much more on the little stories of the always surprising φrench φlatelic pond (that can not be let alone for a dozen days...).

Pascal Marziano is a French collector, expert, hunter, and consequently, dealer of modern stamps and oddities. He just opens his commercial website.

What could I find while I am not very interested in recent definitive freaks and three-zero philatelic orders?

A bookshop... where the note for each sold book will be kept online to help specialists and curious people know what are the tools of their passion.

A thank to one expert of France's new generation.
Published by Sébastien No comments: