An extract from the engraving by Jorge Peral for the 400 years of Québec city, joint issue between the French La Poste and Canada Post, earlier this month of May 2008. 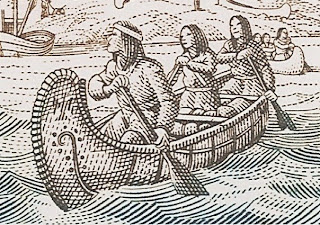 The philatelic part of the Library and Archives Canada website helps find back the engraver's biography. Born in 1955 in Mexico, he worked at the advertising business of his father before he graduated from the National Autonomous University of Mexico.

His professional migrations began in 1978 thank to scholarship from Mexico's National Bank: banknotes design and engraving at Giori in Lausanne (a former part of De La Rue group) and the Bank of Italy.

Then, he worked for seventeen years for the Bank of Mexico before moving to Canada where he obtained the nationality in 1995. He has been continuing engraving banknotes and postage stamps at the Canadian Bank Note Company.

The stamps he worked on are shown on the same Canadian public website.
Published by Sébastien