Last Sunday 6 August 2009, the New Caledonian philately - and surely the Groupement philatélique Le Cagou local association - celebrates the one hundred and fifty years of the postal services inside the island. For which, the now famously mysterious soldier Triquéra executed a stamp portrait of Emperor Napoléon III.

A minisheet of four stamps recalled the history of mail transportation. Surprise, they are among the first French overseas postal operators' stamps to be sold on La Boutique du timbre, the web shop of the French metropolitan philatelic service, Phil@poste. The overseas stamps have been available in the Phil@poste paper catalogue, in the philatelic points (that Phil@poste might want not to be bothered with ?) and the Office of Posts and Telecommunications of New Caledonia itself. A new way of shopping overseas stamps that may help buyers to reach the free postage order.

However, those of you who already practised the shopping site of our reverated Metropolitan philatelic service and who read with the greatest attention Timbres magazine (#103, July-August 2009, page 19) are discovering that this recent newelty (late July for stamps from the French Polynesia OPT) is particularly selective.

From the philatelic fireworks of the 7 August 2009, it does not remember these two following issues: 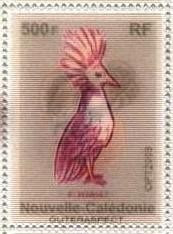 Lenticular Kagus (French: Cagou): by Pierre Forget in the foreground, and by Raymond Coatantiec in the background
(OPT.NC website).
500 CFP francs (or 4,19 euros) for this lenticular stamp (OPT.NC proposes both one stamp alone or a sheet of four). Moving it in front of your eyes let you see the four last definitive types of New Caledonia from 1985 to 2003, and the new one selected after an art competition.

The printer's signature quickly reveals why this stamp is not sold by Phil@poste: it is a creation by the lenticular stamp leader, New Zealander Outer Aspect. Let's play again the psychodrama of 1999 when the New Caledonian minisheet by Cartor was refused by Phil@poste in its catalogues and post offices, concerned about the protection of its own printing plant near Périgueux (which, by the way, just recruted a new engraver, promoting artistic youth and communicating on devil marked engraved stamps) .

How much time before the first letters to the philatelic press from ill-informed collectors enraged to have missed this stamp? How high will the little speculation go in the following weeks?

More surprising the next omission is: 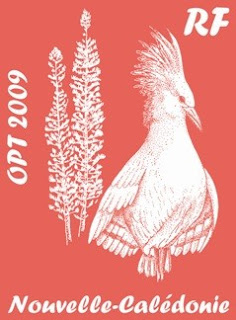 The new Kagu by Laurence Ramon (OPT.NC website).
For the actual look, read here.
Here is the new Kagu definitive series design by Laurence Ramon, an illustrator already used to the archipelago stamps, and interpreted in engraving by Pierre Albuisson.

It marks a return to detailled zoological reality, without symbolic geographic element by Jean-Richard Lisiak, known for stamps in New Caledonia and Wallis and Futuna, or simplified and dynamic strokes by André Lavergne.

The year appears. The United States Postal Service does the same on its Forever Stamp to the ire of completist collectors and the unending joy of printing passionates.

Why not on the commercial site of Phil@poste (a good news for the OPT.NC site with secured payment in English)? A punishment to have a recent emergency definitive booklet printed by local Éditions imprimerie du Pacifique (EIP) that prints the personalised labels se-tenant to New Caledonian stamps too? More simply, all the first printed stock might be sent to Nouméa to replaced the Kagu byAndré Lavergne?
Published by Sébastien