A country and its three pose stamp

However, among the soon-to-be two millions seven hundreds thousands cards exchanged, on out of five came from Finland! Certainly, being there from the start five years afo helps when Chinese users has been arriving for just months ago.

In 2009, a Postcrosser regularly receives cards of Finland, Germany, the United States and the People's Republic of China.

Hopefully, to avoid the receiver's lassitude, Posti is philatelicly inspired: wherever your cards came from Finland, they got rarely the same stamps on them. The thing is the 50 gram nationwide rate is the same than the 20 gram worldwide rate: 0.80 euro. An expensive national postal system for sure, but that let many stamps available for international mail, without having to produce/go buy small cent stamps.

Seldom is intaglio. Frequent are surprises: read me again or Éric.

Today, a simple animal stamp, very topical: a tau emperor. To me a wing retracted butterfly. To scientists and topic collectors, 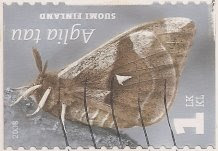 Put "the right way up" for my eye. 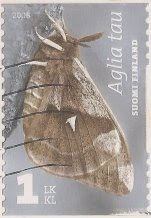 Put the "right way up" for the face value and the sender's eye. 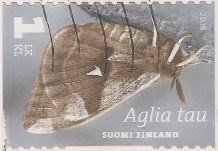 Put the "right way up" to know who it is and where it came from.
Many opportunies of stamps and positioning of them on mail. In France, these days, you need a massive stocks of 1, 5 and 10 cent Marianne stamps or be pleased with a little number of European and worldwide rate stamps. For the latter, there is only one 0.85 euro stamp available from the philatelic program. A mean to encourage the sale of the eight worldwide stamp booklet with copy-paste monuments of France? To force the use of "stamps of writing"? A heavy increased worldwide rate to come soon? [The same happened with the former European rate before it went up 5 cents.]
Published by Sébastien