Philatelic details of the British and French history, at the beginning of World War 2, ended in Europe sixty-three years ago.

Its construction was at its very beginning. The French Clemenceau battleship would sail only on Albert Decaris' stamp issued on 18 April 1939.

On the British side, the 22 June 1940 armistice ended the unbelievable project of the Anglo-French Union in which the two States would have joined their institutions as long as the war against Nazi Germany would last. A project accepted by the British Parliament on 16 June 1940. 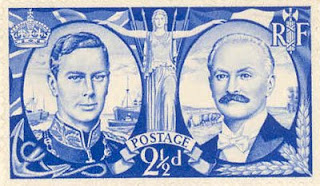 In this topic of these two allies united, a stamp project was begun compiling the national symbols of both States. During the first semester of 1939, Henry Cheffer proposed a design corrected for printing adaptation by Edmund Dulac. It was accepted by President Lebrun (on the left side of the stamp) on 8 June... some days before calling for Pétain as Head of the Council of Ministers.
Published by Sébastien