During the last Four Days of Marigny, I had a short postcard parenthesis, with Elizabeth and Montpellier in Southern France. 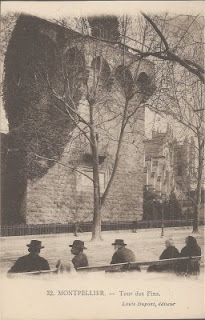 Here is the Pine Tower (locally la tour des Pins) and the Henri IV boulevard edited on postcard by Louis Dupont. The tower is one of the last remains of Montpellier medieval fortifications. Around the old center, you can watch the Babote Tower, an old observatory too, near the train station, or on the Northern opposite side the old door through which the University street get out of the center.

The rest of the fortifications let the place to boulevards, even large places on the Southern and Eastern side: the Comédie and the Esplanade, considering sometimes as the largest pedestrian continuous place in Europe, even if both parts do have its own identity (prefer the Esplanade's gardens during Summer than the mineral treefree Comédie).

Let's come back to the Pine Tower. If, today, it is the headquarters to a folkloric association, it was the Municipal Archives from 1886 to 2000. During my master degree year, I worked some half-days in the very old reading rooms whose walls were filled by ancient archives, like the rest of the old tower. Nowadays, the archives are stored in the new shining Émile Zola Central Library, with a luminous working room (at the last floor open with large windows to a Mediterranean Northern sky...). 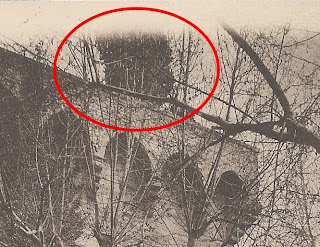 Why "Pine"? Because of those pine trees planted at the top, of course. The ones about whom Nostradamus (either a great prophet of the misfortunes to come and of an never ending upcoming World War 3 to some people... while others estimate him a poet of the actions of his time) would have prophetized: shall they perish, the city with them (or something like that, you know folkloric and historic sources...).

And, of course, they perished... A recent institutional monthly local magazine reassured the good people of Montpellier: the trees are regularly renewed at the first hints of deperishment. Y ou watch them thank yo Google Maps.

You can read the page on the City of Montpellier's website.
Published by Sébastien